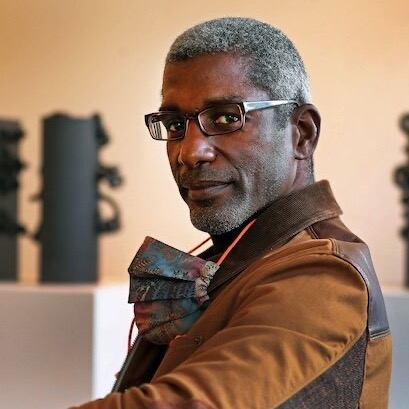 The artist is captivated by beauty and rhythm. But in his “Knot Vessels” series, on view in “Empowering Voices” at Lucy Lacoste Gallery, elegant architectonic forms are literally tied up in knots.

It’s his second series about confinement, after last year’s “Cell Personae.” Briggs saw “13th,” Ava DuVernay’s 2016 documentary about systemic racism in the American prison system, and he read Michelle Alexander’s “The New Jim Crow: Incarceration in the Age of Colorblindness.” The injustice ate at him.
Briggs, 57, has done some prison ministry.

“I worked with a young man who got himself into trouble,” the artist said. “This guy’s persona, his life, is marked out for him. The system is with him for the rest of his life.”

Briggs’s career in clay, which started when he was a student at Alfred University, took an extended detour when he became a Baptist minister. His father, a minister in New York’s Hudson Valley, got sick in the mid 1990s. Briggs went to help with the church. He worked on interfaith initiatives; he helped create a shelter program.

“I knew it was not sustainable,” said Briggs, who sees making art as a spiritual practice. “I need my down time. I need my solitude. I’m an artist.”

As a ceramicist, he loves the technique of pinching clay, coaxing it into form — no additions, no subtractions. His pinched vessels, which you can see on Instagram (@psbriggs3.0), are foliate and serene.